Today, more than ever, entrepreneurial activity harbours the risk of coming under the spotlight of the state prosecutor's office, tax fraud investigations teams or other investigative authorities. Hardly a day goes past without a report of house searches and arrests. Frequently, it does not emerge until many years later that the accusations were unjustified or initiated as the result of anonymous reporting by competitors.

The possible damage to the company and company management is high. This applies in particular when the persons concerned are initially involved in the investigative proceedings without the assistance of defence counsels specialised in commercial criminal law. For particularly in this early stage, the course is regularly set for the outcome of possible criminal proceedings. An unconsidered plea without any knowledge of the background relevant under criminal law can cause irreparable damage, in particular also if the accusations against the persons concerned are unfounded. In addition to the harm to a company's image, there is also a risk of high financial losses; frequently, confiscations of assets can ruin the company concerned in just a few days.

It is therefore all the more important to include experienced defence counsels specialising in commercial criminal law at an early stage. Our team has many years of comprehensive experience in tax and commercial criminal law. Whether it is in preventive consulting prior to any investigations pursuant to criminal law, or in the consulting and representation in investigative and criminal law proceedings. In addition to the defence proceedings, we also represent you in the disputes to be monitored in parallel in the taxation proceedings, in social security contributions law or also in seizure proceedings with authorities. 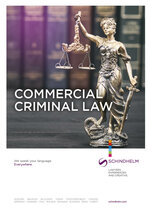